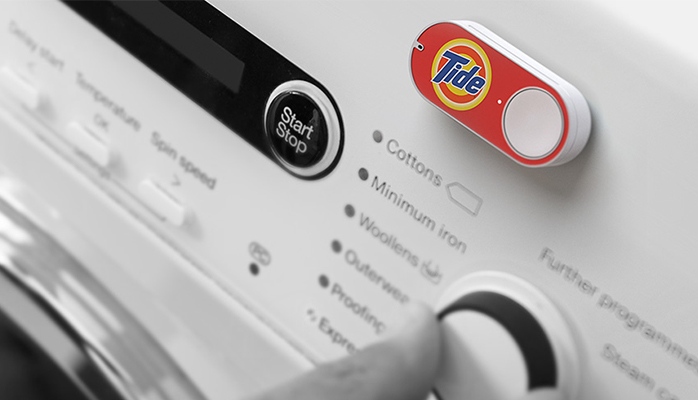 Last week Amazon announced the Dash Button which allows you to press a button to get a single product delivered.

People thought it was an April fools joke but as Chris Dixon often discusses the next big thing is easily dismissed because it seems foolish.

One of my favorite jokey serious push businesses is Push for Pizza. If you are not familiar, watch this video ASAP.

There will be a button for EVERYTHING

You can create your own buttons without any programming experience. Thanks to the DO button app, from the fine folks of IFTTT, you can distill complex actions with the tap of a button.

The wild thing about this push button world we are entering is, that themost beautiful push button device to date, isnt even for sale yet.

As quickly as these buttons appeared, they will disappear.

What’s better than the simplicity of pushing a button?

Not pushing a button ☺

Amazon announced they will offer their whiz bang human/machine system to others via an API so the products you use can order refills on their own.

They are calling this magic the Amazon Dash Replenishment Service (DRS).

The folks over Quirky have already announced a new product line calledPoppy Home that integrates with Amazon DRS.

They have created a sexy coffee maker, baby formula maker, and a pet food dispenser that will replenish itself by notifying Amazon to send more product your way.

A bunch of other push buttons in our life will slowly disappear as well.

Uber, one of the most popular push button services will begin to start fading in the background as well. They recently released an API that enables developers to integrate calling a car directly into their app. Uber is having a hackathon to promote the development of all different kinds of app integrations.

This will probably spawn a whole new way of interacting with the car serviceas well as the world around us.

This story originally appeared on Medium.